The John Wicki
Register
Don't have an account?
Sign In
Advertisement
in: Characters, Males, Main Characters,
and 10 more

"Rules. Without them, we'd live with the animals."
—Winston[src]

Winston is the owner of the New York Continental Hotel, an establishment that functions as a neutral territory for hired killers. No business is allowed to be conducted on hotel grounds without incurring terrible penalties, which are often ordered and overseen by Winston.

Winston is the deuteragonist in the John Wick film series but he serves as a major antagonist in the 2019 film John Wick: Chapter 3 – Parabellum, showing that while he is a friend to John Wick, he is still a high-ranking member of the Continental, and does what he has to do to those who break its laws.

Winston seems to hold a high position in the underworld society and all assassins know the rules of the Continental. However, Winston's personal history, and that of the hotel, is unknown. It seems that the equipment used to place targets or tabs is of a dated time. Whether this is a stylistic choice or a means of protection has yet to be acknowledged.

The chain of Winston's network appears to be well-connected and respected by many underworld equipment providers, to the point that equipment orders can be delivered to the customers' hotel rooms.

When John seeks refuge at the New York Continental Hotel, he goes to the bar to search for Iosef Tarasov after the Russian criminal and his friends robbed his car and in the process killed his dog. Winston greets John as they are old friends, but tells him that such businesses aren't allowed in the hotel, so he's better off just relaxing. He, however, provides Wick the location of the trio which is the Red Circle Club.

After Ms. Perkins breaks the Continental's rules by killing an old assassin and friend to John named Harry, Winston contacts her for a meeting, interrupting her attempted ambush of John. Winston confronts the assassin and calmly tells her that her membership in the Continental has been revoked, in which his henchmen quickly execute her and walk away. He later calls John to tell him where to find Viggo Tarasov (Iosef's father).

After John's Marker is called in by Santino D'Antonio, Winston informs John that he has no choice but to perform the duty asked of him as it is one of the two rules of the Underworld. After John fulfills his obligation to D'Antonio, Winston visits him to ensure D'Antonio officially records the Marker as fulfilled.

D'Antonio eventually flees to the Continental where Winston tries to keep John from killing D'Antonio on Continental grounds. Nevertheless, John kills D'Antonio in front of a horrified Winston.

The next day, Winston meets with John at the Bethesda Fountain and uses his influence to make all of the circling assassins leave. Winston informs John that the bounty on him has been doubled by the High Table and that he is excommunicated from the Continental for killing Santino on Continental grounds.

However, Winston tells John that he will delay the announcement by one hour to give John a chance to escape. John tells Winston to warn everyone that comes after him that John will kill them. Winston acknowledges this and also provides John with a Marker from Winston in case he needs it in the future. As John departs, Winston calls in the bounty with orders for it to begin in one hour.

"Oh, he has to die."
—Winston to The Adjudicator[src]

Winston returns in the third film, first seen walking into the hotel with his personal assistant and concierge, Charon, who discusses with him about John Wick's ex-communicado and whether or not the odds are at even, Winston responds by claiming "A $14,000,000 bounty on his head, every interested parties wants a piece of it, [I'd] say the odds are about even". After John's ex-communicado goes into effect and the emails are distributed, Winston simply remarks "And away we go".

Charon later contacts Winston of an Adjudicator's arrival to meet with him and discuss the situation regarding Santino D'Antonio's death by John, Winston greets her and immediately discloses the events that occurred in the hotel, the Adjudicator however disregards the events and conveys that they are here to discuss the rules that John broke in the hotel. Winston informs them that they still have Santino's corpse which they requests to see, during this they observes his corpse and analyses the weapon of which he was killed with while Winston regards that he had no control over John's actions.

The Adjudicator disregards this however by deeming that he lives because Winston had deemed it as such and that when given the opportunity to kill John he allowed him to live, bringing up their prior history as friends. Winston attempts to justify his actions by claiming he had made John ex-communcado but the Adjudicator remains unmoved as Winston had given John an hour to escape, Winston rebukes them stating that John had broken the rules in "his hotel" to which the Adjudicator flaws. They state that Winston's paucity of fealty to the High Table is problematic, Winston defends himself by pointing out his service of over 4 decades to which the Adjudicator rebuffs him as he had been serving under the Table. They make it explicit that they are here to adjudge his actions and gives him a week to get the Continental Hotel's affairs in order to which he will have to step down and his successor will be named. Winston simply comments for them to "Enjoy [your] stay at the Continental".

John who encounters the Elder, one who stands above the Table, is assigned the task to kill Winston. After a brief fight and chase with Zero and his students, John reaches the hotel and requests to see Winston to which Charon agrees to. Winston who is in an exclusive room waiting for John informs him to tread carefully while he discusses John's task to kill him, Winston holds a gun to him and tells him not to make the mistake of feeling that it is a personal matter, requesting him that if he feels he must do so, then to put a bullet through his heart. Winston however tries to covertly use the situation to his advantage as he does not desire to resign from his position and attempts to persuade John to take up arms against the High Table with him as he has no intention of stepping down. He informs John to choose either to kill him or to join him, asking who he wishes to die as, the Baba Yaga (the Russian term for Boogeyman) or as a man who loved and was loved by his wife. The Adjudicator then abruptly interrupts the scene and greets John while asking of Winston's decision to step down, which he simply replies that "[I] think not" and John who refuses to kill Winston.

Winston and the Adjudicator discuss the circumstances with the Adjudicator alleges that they can not continue forever, Winston affirms this but also ensures that while the High Table may take the hotel from him, they can not hold it as Winston's allegiances extend beyond the hotel. The Adjudicator then asks what they propose they shall do, Winston formally requests to keep his power under the table, acknowledging he overstepped his fealty and chooses to re-pledge his fealty to the High Table. A solicitous John remarks to Winston while the Adjudicator realises Winston was merely showing strength so as to retain his power and position, informing him that the High Table will accept his fealty, however they still express concern about John Wick and what they should do, to convince the Adjudicator of his loyalty Winston shoots John notably aiming for his bulletproof suit, off the roof.

The Adjudicator then reconsecrates the hotel, Charon remarks that it was "well-played" and the Adjudicator departs but before leaving, goes to check for John's corpse in the alley-way however he has disappeared, the Adjudicator informs Winston of this who mistakenly takes it that John had died possibly feigning it but as such a suspicious Adjudicator warns him of the repercussions that could ensue from the Table and below should John survive to which Winston acknowledges and then remarks "Baba Yaga". After the Adjudicator departs, Winston seems to smile, suggesting that he may know exactly what happened to John, who is soon revealed to have barely survived the fall and taken to the Bowery King.

It remains unclear if Winston had intended to simply feign John's death or if he genuinely intended to kill John.

"I have served and been a beacon of order and stability to our industry for over 40 years."
—Winston[src] 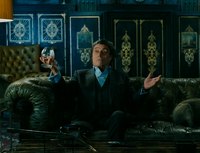 Winston hiding in the vault (Chapter 3) 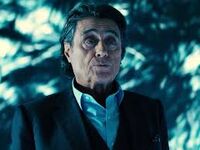