John Wick is now a marked man on the run in Manhattan. He is declared "excommunicado" by The High Table, which places a $14 million contract bounty on his head as a result of Wick's killing of High Table member Santino D'Antonio on the Continental grounds. At first, Wick travels to the New York Public Library and retrieves two concealed items–a "marker" (medallion) and a crucifix necklace. Wick leaves but is pursued by an assassin team into an antique warehouse, which leads to a bloody fight between Wick and the gang involving antique weaponry.

Elsewhere, The Adjudicator (a representative of The High Table) visits both Winston (the Continental Hotel manager) and The Bowery King in his hideout due to both previously providing assistance to Wick. Both are ordered to relinquish their positions of authority within seven days or face the consequences. Meanwhile, having survived the warehouse fight, Wick visits The Director – a figure from his past who runs Ruska Roma. He hands over the crucifix necklace to her as a form of currency, which allows him safe passage to Casablanca.

In Casablanca, Wick visits a local branch of The Continental and meets with Sofia–a woman from his past who owes him a favor. Wick hands Sofia the "marker," he retrieved from the library-a medallion, which symbolizes an unbreakable promise by one person to fulfill a task requested by another. Wick asks Sofia to honor the marker by helping him locate The Elder-a senior member of The High Table.

Sofia reluctantly agrees and takes Wick to a local man named Berrada. Berrada provides Wick with The Elder's location within the desert, however, becomes confrontational and shoots one of Sofia's dogs. In retaliation, Sofia shoots Berrada in the leg. With the help of her two trained dogs, Sofia and John fight their way out of the area before traveling to the desert. Having fulfilled her "marker," Sofia leaves. John continues walking in the desert alone, before collapsing due to exhaustion. John is found by a passing traveler and taken to The Elder's location. The Elder gives John a choice between dying or accepting a mission to kill Winston, a close friend, on behalf of The High Table in exchange for the removal of the bounty on his head. John accepts the mission, and as a show of commitment to The High Table, severs his ring finger and gives his wedding ring to The Elder.

Meanwhile, The Adjudicator recruits an assassin (Zero) and his gang to act as enforcers for The High Table. They visit both The Bowery King and The Director, kill several of their associates before inflicting physical punishment on both of them as a consequence of helping Wick. Wick arrives back in New York. He is confronted by Zero's gang but manages to escape on a motorcycle. After killing the pursuing gang members, Wick is chased by Zero to The Continental, where Wick takes sanctuary. Wick speaks with Winston, who knows he is there to kill him. The Adjudicator arrives; however, Wick refuses to carry out the kill order, and Winston refuses to surrender his position at the hotel.

As a consequence, The Adjudicator declares The Continental as "deconsecrated," permitting killing on the premises once again, before requesting an armed unit from The High Table attend the hotel to kill Winston and Wick. With the help of the hotel's concierge Charon, John takes on The High Table's forces inside the hotel, ultimately defeating them before being confronted by Zero's gang once again. Wick eventually overcomes the gang members before fighting and killing Zero.

The Adjudicator contacts Winston and offers to negotiate, eventually agreeing to allow Winston to remain at The Continental, but states Wick remains a problem. Winston betrays Wick, shooting him before Wick falls from the roof of the hotel. The Adjudicator leaves The Continental but notices Wick's body is gone. She informs Winston, and threatens him if John Wick should remain at large. Both agree that Wick continues to be a threat to both of them. An injured John Wick is taken to a heavily scarred Bowery King's new hideout by the Tick Tock Man. The Bowery King tells John he is "pissed off" with The High Table, and asks Wick if he feels the same way. Wick replies, "yeah."

Chad Stahelski announced in October 2016 that a third John Wick film was in development.[1] and in June 2017 it was reported that Derek Kolstad would return as the film's screenwriter.[2] In January 2018, it was reported that Stahelski would return to direct with Hiroyuki Sanada in talks to join the cast.[3] Later, it was revealed that Ian McShane, Laurence Fishburne, and Lance Reddick would reprise their roles from prior John Wick films.[4] Filming began in May 2018 in New York City and Montreal, along with the additional filming locations of Russia and Spain.[5] In May 2018, Halle Berry, Anjelica Huston, Asia Kate Dillon, Mark Dacascos, Jason Mantzoukas, Yayan Ruhian, Cecep Arif Rahman, and Tiger Hu Chen joined the cast.[6][7][8] In November 2018, Saïd Taghmaoui confirmed his involvement in the film.[9]

Filming began on May 5, 2018, in New York City and Montreal, along with the additional filming locations of Russia, Morocco, and Spain. Principal photography wrapped on November 17, 2018. [4][10][9]

The visual effects are provided by Method Studios and Image Engine.[11] 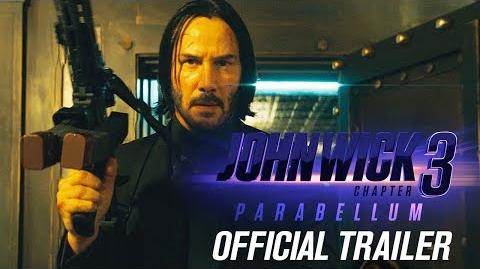